New York City is known for so many things…
It’s big. It’s glitzy. It’s noisy.
How about…..Quiet and Romantic?

Greenwich Village has those qualities!
Crooked streets in the West Village. Counter Culture. Avant Garde. Jazz, blues and rock and roll bars.  Beautiful Washington Square Park with the magnificent Washington Arch.  NYU.
The vibe in Greenwich Village is different.  It’s much more laid back.  Very cultural and dare I say Romantic!  Even if this trip is not the romantic type…the tips below will serve you well. Enjoy!

Step One on this romantic journey

Book a room at the Washington Square Hotel 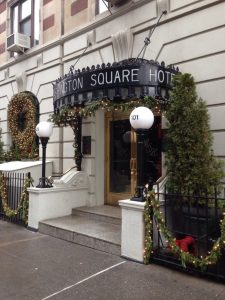 We suggest that you call the hotel directly…. you can ask for Charlie who is a manager and let him know you are referred by Kornblit Tours. Splurge and ask for the Executive King room with a corner view of Washington Square Park…the room is spacious by NYC standards and has a beautiful bathroom with double sinks and a modern shower. Ask for the VIP breakfast at their restaurant called North Square. 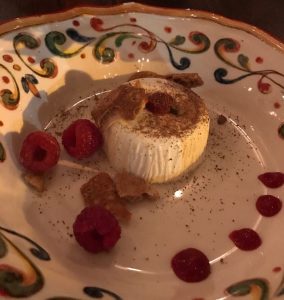 www.olioepiu.nyc
212-367-2067
A very pretty Italian restaurant
The Lemon Ricotta Panna Cotta dessert is to die for!

www.pesce-pasta.com
212-645-2993
This restaurant is also Italian and specializes in Fish, Seafood and Grilled Italian vegetables. The House Antipasto is a must and can be shared by the table. If it is a huge hit, you can always order another.

www.ladybirdny.com
917-261-5524
An intimate bar with small tables that doubles as a vegan tapas bar serving delicious vegetable dishes and a Chocolate Fondue to finish the night! 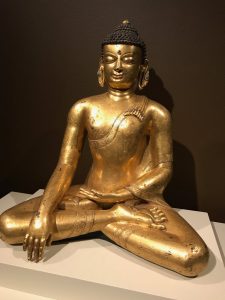 The Rubin Museum of Art
http://rubinmuseum.org/
212-620-5000
An arts and cultural hub in Chelsea (near Greenwich Village) featuring art and ideas of the Himalayas and neighboring regions including India.  If you are into Yoga, the Buddha, meditation…definitely for you!

Or… Book a Tour with us on February 11, 2018! www.kornblittours.com
We will take you to the most iconic Greenwich Village sites and hidden gems of this very romantic neighborhood!

One of the greatest gifts New York City has to offer is its burgeoning art scene that’s constantly being revived with intellectual and intriguing exhibitions at its many art galleries in many lower Manhattan neighborhoods. Here are some notable shows to see in Chelsea this month:

One of the greatest gifts New York City has to offer is its burgeoning art scene that’s constantly being revived with intellectual and intriguing exhibitions at its many art galleries in many lower Manhattan neighborhoods. Here are some notable shows to see on the Lower East Side and Soho this month:

Autumn is festival and parade season in New York City.  Here are some of the big ones, coming up soon:

On the Upper West Side is a small museum that many New Yorkers most likely don’t know about. Located in the heart of Lincoln Square, The American Folk Art Museum is a hidden gem dedicated to displaying exhibitions by artists whose talent has been shaped by personal experience rather than by formal training. The current exhibition on view is entitled War and Pieced which features several large quilts various types of shapes and geometric patterns.

All the quilts on view were made by men using richly dyed wools coming from British military uniforms. The patterns and images that can be found in the quilts reflect upon the hardships that occurred during the Crimean War, and also conflicts in India, South Africa, and other troubled regions of the British Empire during the 1800s. Also on view are quilts made from felted wools during the Prussian and Napoleonic wars beginning in the mid-eighteenth century. The exhibition is curated by Dr. Annette Gero, and includes more quilts from public and private collections, many of which have never been seen before. The exhibition will be on view through Jan. 7, 2018.

The museum also has a lovely gift shop with items that are both adult and kid-friendly that are simple and many of them handmade, and are sure to fill your heart with love.

New York is one of the major hubs for independent film fans given there are at least 30 theaters specializing in the genre in the whole city. Some of these theaters are relatively new while others have been neighborhood staples for decades. Below are three notable ones:

Lower Manhattan has the one of the most amazing skylines around, and one of the best ways to see it – and lots of other things too – is from the Staten Island Ferry.

The ferry, which connects the New York City boroughs of Manhattan and Staten Island, is a free 25-minute, five-mile trip that transports 70,000 passengers each day, most of who use it to commute to work. But it’s also one of New York’s top visitor attractions, offering spectacular views of New York Harbor and the skyscrapers and bridges of Lower Manhattan, including a head-on view of One World Trade Center, which is now the tallest building in the country.  Most impressive, however, is the stunning sight of the Statue of Liberty, holding her torch aloft in one hand and carrying the Declaration of Independence in the other. As the ferry glides past, passengers will be snapping pictures to their hearts’ content.  Another landmark that, like the Statue of Liberty, symbolizes the freedom that characterizes America, is Ellis Island, the gateway for more than 12 million immigrants to the United States for over 60 years, from 1892 until 1954. The building that housed its Great Hall is now a museum, and is part of the Statue of Liberty/Ellis Island national monument.

The Staten Island Ferry operates 24/7, 365 days a year, with boats departing from the Whitehall Terminal in Manhattan and from the St. George Terminal on Staten Island. For most of the day, they depart every 30 minutes, on the hour and half hour, and every 15 minutes during morning and evening rush hours.  It’s best, of course, to go when the weather’s pleasant and not during rush hour (7-9 a.m. in the mornings and 5-7 p.m. in the evenings), for a pleasant, relaxing ride.

If you’re sightseeing in New York, there’s a good chance that the Financial District’s Charging Bull statue (a.k.a. the Wall Street Bull) is on your list. But you’ll also see another, more recent, statue standing just a few feet in front of the headstrong animal. Fearless Girl by artist Kristen Visbal was commissioned by a Wall Street investment firm and installed in that spot in recognition of International Women’s Day, March 8, 2017. The newer bronze statue stands just over four feet tall and weighs 250 pounds. The girl is meant to be Latina to send a supportive message to immigrants along with its message of female strength. She stands with her feet apart, hands on hips, staring the bull directly in the eye.

While Fearless Girl quickly became a popular attraction on lower Broadway, its placement was controversial. The Charging Bull artist, Arturo Di Modica, said the investment company that sponsored the statue violated his rights by installing it near his iconic bull sculpture without permission. The city had granted a permit for Fearless Girl to remain at the site for one month, but its popularity resulted in New York Mayor Bill DeBlasio agreeing to let it remain through February 2018. So that’s where it is for now, see while you can.